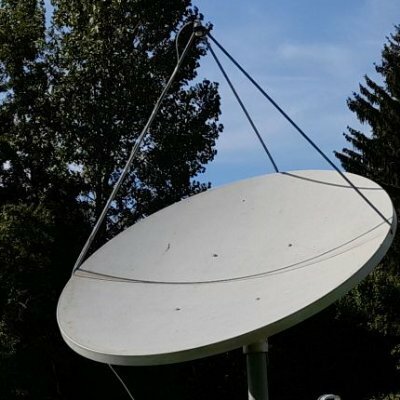 Reception of Meteor-M N2-2 HRPT image data at 1700 MHz using a stationary, omnidirectional antenna.
Image quality is poor, but as a proof of concept it shows that omnidirectional reception at 1.7 GHz would be possible if the satellites used a more specialized downlink

Russian weather satellite Meteor-M N2 lost its orientation and was still off-axis as of a few minutes ago. Got home with very little time left so I had to use my emergency 70cm offset dish to receive the image broadcast, but signal was strong enough during this low east pass
No LRPT detected on this pass

Something I've been thinking about and that I've started working on today; a way to encode images for digi radio transmissions so that no matter what part and how much of the transmission you receive, you get the full image
Hope to do a real over-the-air test within a few days

Transit 1964-083D ("5B-5") once again transmitting strong. I received this signal around 136.65 MHz while it was passing over Europe today - it has been over 57 years since its launch.
(carrier has been suppressed when demodulating)

As of now this is the oldest known satellite still transmitting. It has been decommissioned and its batteries died long ago, but when its solar panels catch sunlight they allow the satellite to momentarily come back alive again