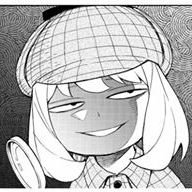 It's alright to be bad at something

I think I'm speaking to a lot of perfectionists here.

I know I missed out on a lot of things as a child and teenager because I wasn't good at them. Yeah, maybe I never could have been first violin in my school's orchestra, but the fact that I sucked at it in the first month despite practicing is what made me drop it. Yeah, I was in 4th grade, but that sort of attitude continues into adulthood.

Do you enjoy your hobby (at least most of the time)? Then it's worth doing.

And it's normal when you do something to get worse at it for a bit. Quality waxes and wanes, that's normal and I want you to remember that as you practice piano, cross stitch, or knitting.

This links to the earliest amigurumi I ever did. 2013. Do you see the scarf? I added that because it lacked stability, and I knew the head lying limp would look bad. It's a piece of shit. But it's my piece of shit. The time I put in was not time wasted. I learned from it to crochet tighter, and while I haven't made a Hobbes again, I know if I did, it would end up better, because it's been years.

A lot of my early projects don't have pictures because I didn't think of taking them (they sucked, why would I?) and I regret it now, because I can't see how much I've grown. I'm also gonna let you in on a secret if you make something: With the exception of that crocheted Hobbes, I have never had someone comment on a mistake. The difference between factory-made and hand-made is the handmade one has mistakes and love in it.

I suck at playing piano, and that frustrates me because I'm at a skill level where it is very hard to play anything I actually like, and sometimes despite my practice, I start playing it even worse at lessons.

The important thing is: Do you enjoy your hobby? Then do it (responsibly. I take no responsibility if you hurt yourself because you skateboarded too hard)

genuinely confused on what to do here

I partitioned my hard-drive

found this in email ✌️ #introductions

Hey hens, I'm just a gal looking for some entertainment, I go by Athy and I choose Mastodon beccause I heard it's like tumblr but less toxic. We'll see about that.

Also this platform is complicated for me a ha

Toto, I don't think we're blessing the rains down in Africa anymore

anyone know good youtuber to watch that plays Tsushima?